November 01, 2020
Arbitrability of any issue is concerned with the question of whether a dispute can form part of the subject matter of arbitration. In India, the scope and extent of ‘arbitrability’ of various subject matters have been in constant doubt and debate. This uncertainty has arisen due to the lack of any express provision under the Arbitration and Conciliation Act 1996 ('A&C Act') restricting the arbitrability of disputes arising out of specific legal relationships. One of the victims of this uncertainty is the landlord-tenant relationship which is governed by the Transfer of Property Act 1882 ('ToPA'). 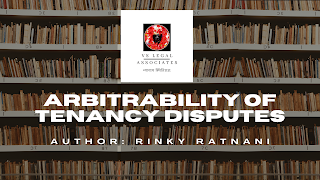 October 10, 2020
A business can grow over time as the utility of its products and services is recognized in the Market. But in this era of Globalization where the environment is dynamic, competitive and rapidly evolving, Mergers and acquisitions has gained importance as a method of bringing immense inorganic growth to a business.  It provides various benefits to the entities which include increased resources, access to market, technology, reducing the competition, diversification of business, Regulatory, Tax and fiscal considerations. There is always a synergy value that gets created with the joining of two entities which is more when compared with their individual stands.  Mergers can be defined as union of two entities into one; acquisitions are situations where one player takes over the other to combine the bought entity with itself. It may be in form of a purchase, where one business buys another or a management buyout, where the management buys the business from its owners. Further, de-mergers, i.
Post a Comment
Read more